The latest from 787 Racing

Check out Marty Kovacs’s account of the Breckenridge 100 in 2011. He’s been back each year since and is already booked for 2014. Click the image below for a full PDF report. 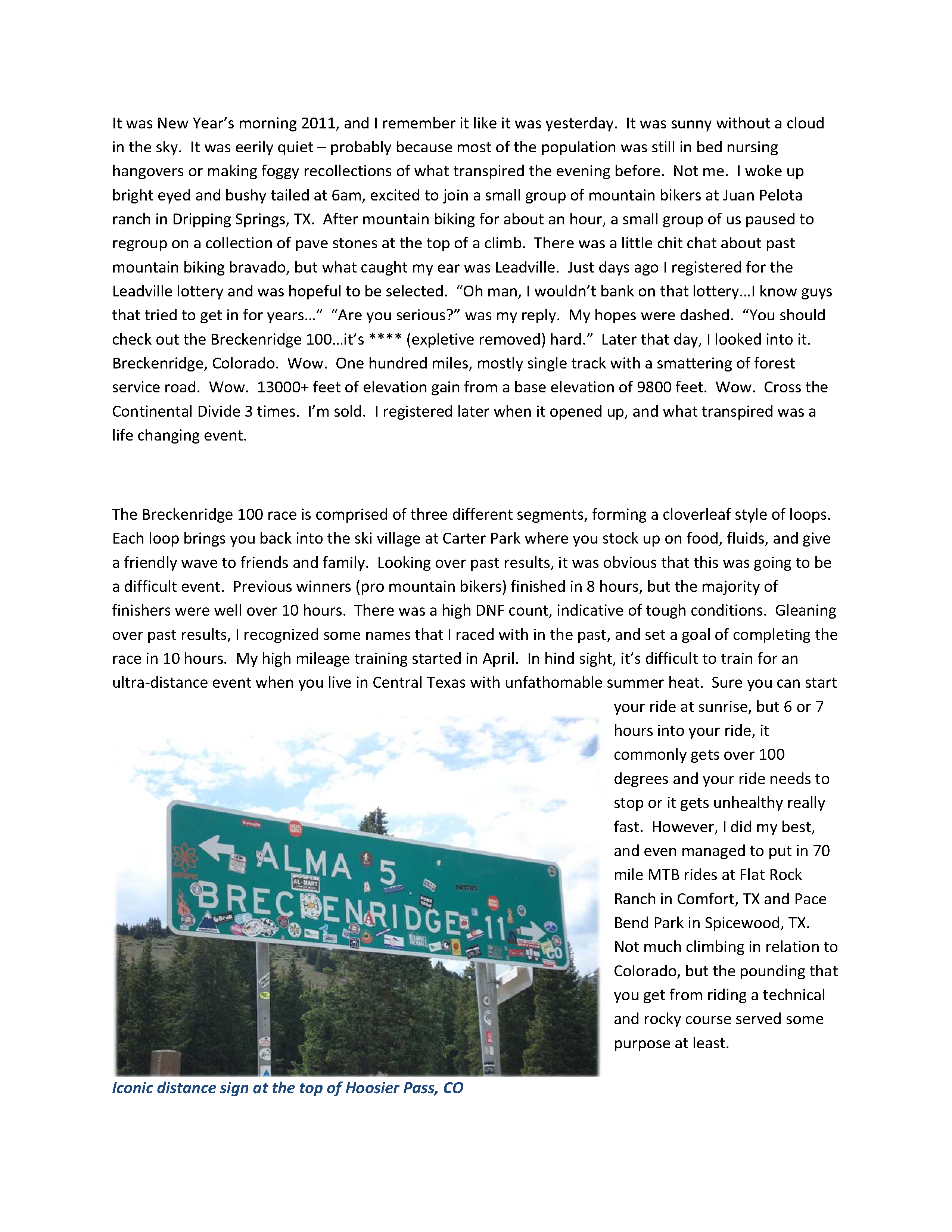 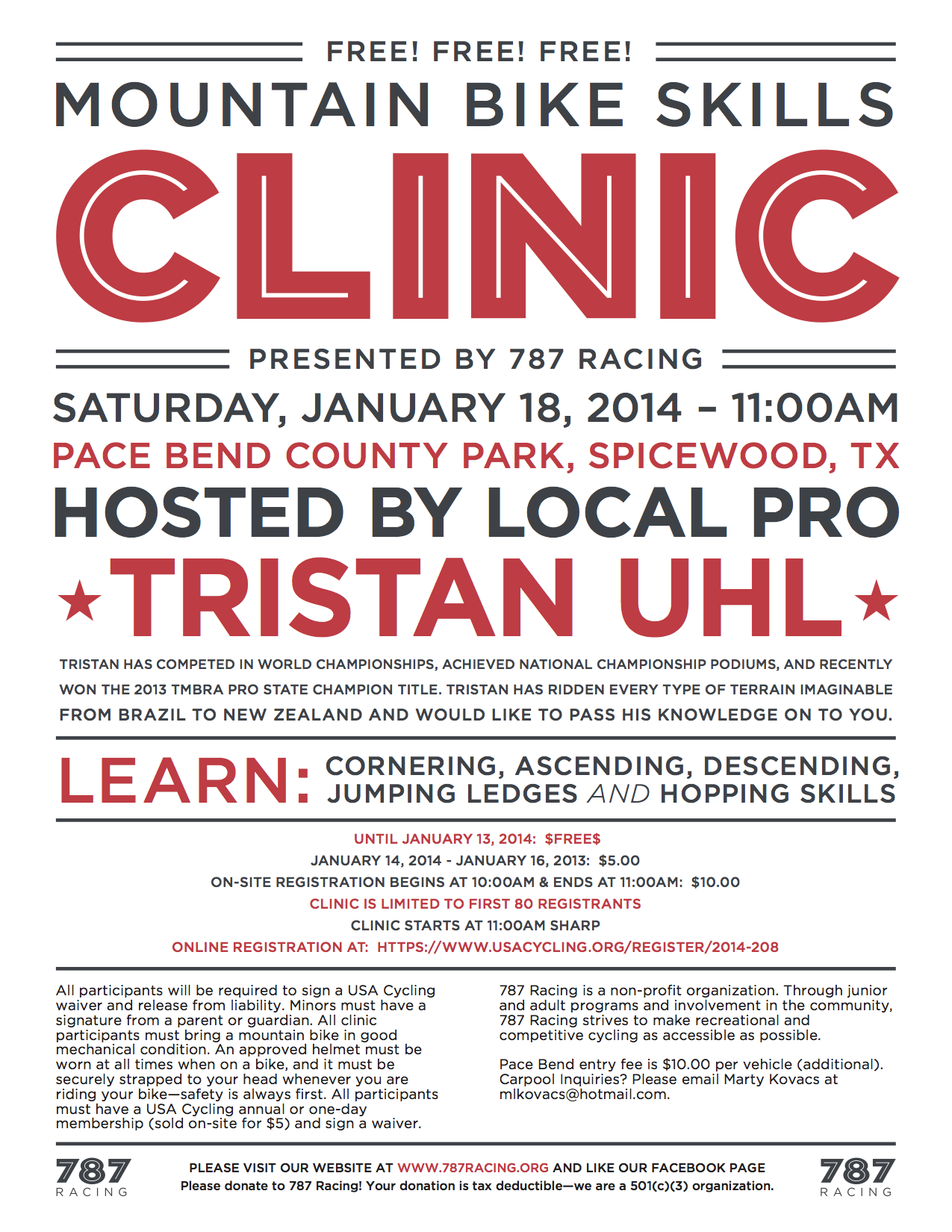 Come check out our MTB Clinic on January 18th with 2013 TMBRA Pro State Champion Tristan Uhl! The clinic starts at 11:00AM at Pace Bend County Park. Registration is FREE until January 13th, $5 January 14-16, and $10 on-site. Registration is limited to the first 80, so be sure to pre-reg!

Full details are on the flyer above, or you can register on USACycling.org. 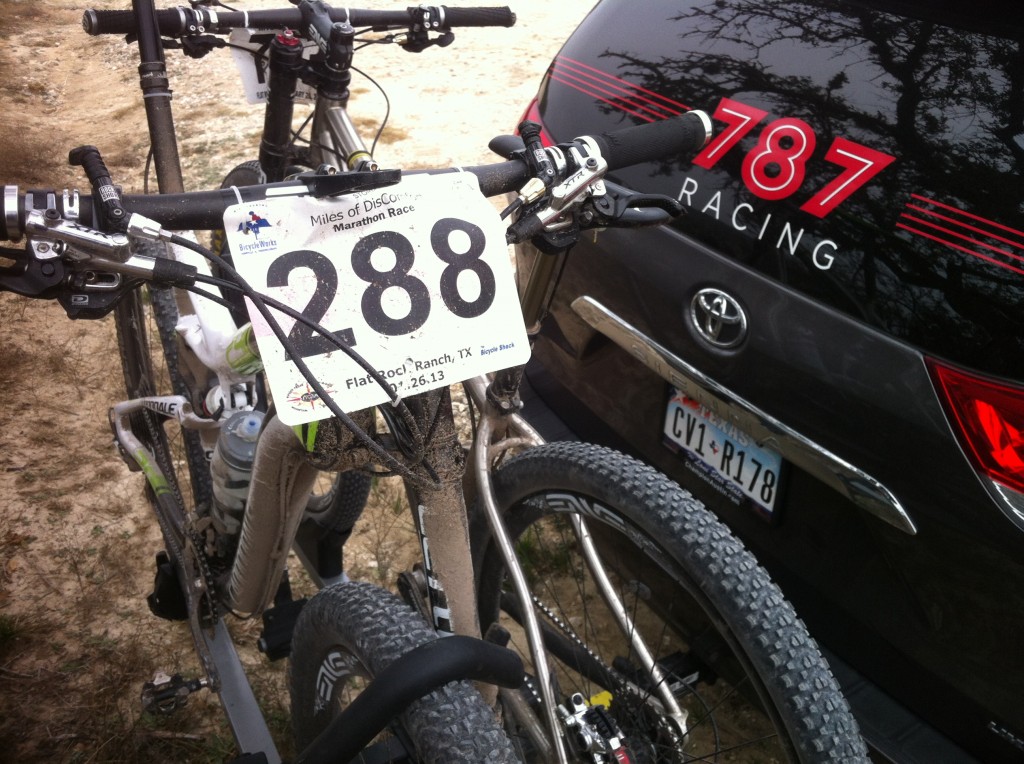 Two of our well-used bikes after the Miles of Discomfort race in Comfort, Texas. (Photo by B. Shiva Mayer)

With the 2013 introduction of Cannondale and Austin Tri-Cyclist as 787 Racing sponsors on the dirt, a number of us have been putting more focus on racing our mountain bikes.  This year’s Miles of Discomfort race, part of the Texas Mountain Bike Racing Association’s Marathon race series, featured a number of 787 athletes.

Tom Ketterhagen, Mike Panozzo, and me all competed in the 26 mile, one lap category (in our respective age groups).  Mike flatted only one quarter mile into the race, but thanks to the assistance of the good folks that run Flat Rock Ranch, was able to continue racing until suffering another flat tire shortly before the finish.  Tom suffered a few incidents on the difficult terrain, and finished the race 19th in the 40+ age group.  As for me, in my third mountain bike race ever, I managed to keep my Cannondale Scalpel upright the entire way to finishing 13th in the 19-39.

We all had a lot of fun out in Comfort, Texas, and look forward to returning to the area for the Fredericksburg road races later in the season!

Below are our complete results for this State Championship ITT and TTT:

Six 787 racers went to BC for the fifth edition of the well known seven-day mountain bike stage race.  In the Epic (50km/day) category, Robert Biard, Robbie Robinette, Alex Robinette, and Chann McRae all braved the wilds of British Columbia.  In the Challenge (30km/day) category, Jen McRae won the Women’s Open, and Shiva Mayer placed 10th in the Men’s Open.

Another year at this fantastic event by the folks in McKinney, Texas.

For those who weren’t there, here’s a view off the back of the Men’s 2/3 race:

Our top 10 results for the two days of the Texas State Criterium Champtionship are:

There was some stong competition in all of the races and we had a strong showing, with many more finishing in the top half of some large fields.  Good job to all!

Our top 10 results for this race were:

Unfortunately fires caused the cancellation of the 2 day of racing. However, on day 1: